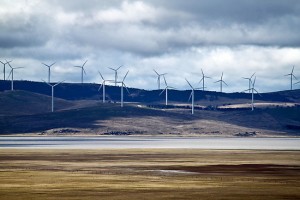 On 4 March 2016, ACT Minister for the Environment Simon Corbell announced the Sapphire Wind farm project had won the final reverse-auction to supply wind power that will power 48,000 Canberra homes. Recently there has been some debate over the environmental benefits and whether renewable energy for Canberra is worth the cost. Stephen Bygrave, CEO of Beyond Zero Emissions, and Phoebe Howe, Assistant Director at the Conservation Council authored this piece in response:

Residents of the ACT can thank the Government’s renewable energy investments for locking in modern, affordable, clean, Australian-made energy supply for the next 20 years. Renewable technology has developed rapidly this decade, so reaching 100% clean energy is a sound investment.

The ACT Government set a target of 90% renewable electricity for the year 2020 to meet our greenhouse gas emissions reduction aims. Canberra is at risk from climate change, including extreme weather events intensified by the extra energy that increased greenhouse gases trap in our atmosphere. Climate change threatens our health, safety and livelihood.

With 2015 the hottest year on record, policies to reduce emissions have never been more urgent. The question of how to respond to climate change can be overwhelming and is complex, but rather than throw up our hands or ignore the problem, all parties in the ACT Legislative Assembly have agreed that Canberra should be taking action at the local level to play our part in the solution.

Canberrans are among the highest greenhouse gas emitters per person in the world and we need to halt the part we play in global warming. If Canberra can transition our energy use and become a zero emissions city, we can demonstrate the concrete steps it takes to tackle climate change while our community thrives.

The world needs such leadership, and climate policies at the city-scale have been stimulating stronger national climate policy commitments. During the December 2015 Paris UN climate conference 1,000 mayors committed their cities to reach 100% renewable energy by 2050. When cities reduce their emissions they demonstrate to business and national governments that climate policies can and do work.

In the ACT we are moving at a reasonable pace to reduce emissions. We can and should move even faster, as Beyond Zero Emissions’ research has demonstrated that Australia could reach zero emissions in just ten years.

The ACT’s investment in renewable energy has been the main driver peaking our emissions which have now started to drop. Renewable energy technology available right now can meet all of the ACT’s electricity needs, including storing energy to deliver reliable supply every day.

Gas is not needed to back up renewable energy. A fossil fuel, gas is increasingly sourced from fracking which disrupts agricultural production and contaminates ground water. The price of domestic gas is also increasing rapidly, it’s no longer a ‘cheap’ fuel. The technological reality is we don’t need gas.

Power can be stored not only in domestic batteries – which alongside energy efficiency will provide householders and businesses with energy freedom – but at large scale, too. Batteries are now being developed to support large electricity grids (up to 30MW). Pumped storage with wind is another source of baseload 100% renewable energy using very small dams that act as a battery storing water to be pumped through turbines when needed. Such dams don’t need the quantity of water required by traditional hydroelectricity dams, and are a common solution overseas that could be adopted to safely cover the ACT’s energy storage needs.

The ACT’s renewable energy investments don’t even need to deliver every one of these technologies to help transform the National energy grid. Canberra has punched above its weight supporting the renewable energy sector to keep developing despite negative Federal renewable policy. And the local Canberra economy is benefitting with renewable energy skills training now available at CIT, and solar projects rolling out in the Territory.

Our recent investments in clean energy are a wise economic move, even if we ignored the fact that renewables are a key solution to climate change. Energy isn’t free, and national prices are currently affected by the need to replace ageing fossil fuel power stations and an expensive energy grid.

Australia has to invest in energy infrastructure in the next decade and we won’t be choosing dirty technologies of the past. Canberra is ahead of the game, as our recent purchases of wind and solar energy have locked in a cheap renewable energy price for the next 20 years. These prices will soon outperform fossil fuels – especially gas.

If we ignore climate change when discussing renewable energy policy, we ignore a considerable cost: every tonne of greenhouse gas we emit adds to the blanket of gases trapping warmth from the sun and driving dangerous changes to our earth system. Every day we delay the transition to clean energy we worsen the threat of climate change.

Canberrans can be proud that our policies are tackling our emissions and our renewable energy policies are on track to meet 100% of our electricity needs.

We need to hear from all existing and aspiring politicians on how they plan to reach zero emissions as quickly as possible, prepare the Canberra community to adapt as climate impacts affect our region, and finish the job sourcing all of our electricity from clean renewable energy.